According to family lore, when Rabia Chaudry’s family returned to Pakistan for their first visit since moving to the United States, two-year-old Rabia was more than just a pudgy toddler. Dada Abu, her fit and sprightly grandfather, attempted to pick her up but had to put her straight back down, demanding of Chaudry’s mother: “What have you done to her?” The answer was two full bottles of half-and-half per day, frozen butter sticks to gnaw on, and lots and lots of American processed foods.

And yet, despite her parents plying her with all the wrong foods as they discovered Burger King and Dairy Queen, they were highly concerned for the future for their large-sized daughter. How would she ever find a suitable husband? There was merciless teasing by uncles, cousins, and kids at school, but Chaudry always loved food too much to hold a grudge against it. Soon she would leave behind fast food and come to love the Pakistani foods of her heritage, learning to cook them with wholesome ingredients and eat them in moderation.

At once a love letter (with recipes) to fresh roti, chaat, chicken biryani, ghee, pakoras, shorba, parathay and an often hilarious dissection of life in a Muslim immigrant family, Fatty Fatty Boom Boom is also a searingly honest portrait of a woman grappling with a body that gets the job done but that refuses to meet the expectations of others.

Chaudry’s memoir offers readers a relatable and powerful voice on the controversial topic of body image, one that dispenses with the politics and gets to what every woman who has ever struggled with weight will relate to.

Food memoirs have my heart. I have always been drawn to them with Be My Guest by Priya Basil being one of my favorites. When I was invited to promote Fatty Fatty Boom Boom: A Memoir of Food, Fat, and Family by Rabia Chaudry, I was excited to pick it up. All the more because it was about the food, culture, and traditions of the other Punjab we rarely read about.

Inspired by the colorful and vibrant Pakistani truck art, the cover is beautifully illustrated with a generous peppering of spices. Each chapter is named with a colloquial food-related title that every south Asian would relate to. Reflecting the author’s journey and relationship with food (and sometimes family) along the way. Sample jal bin machli (fish out of water) where she struggled to fit in. Or “ghaans phoos” (rabbit food) when she tried out all the fad diets. The writing style is conversational and peppered with anecdotes.

“My entire life I have been less fat and more fat, but never not fat.”

The first half of the book is devoted to the author’s growing years and extended family in Lahore. A short history of her grandparents who migrated from India to Pakistan during the partition. Her family’s immigration to the United States. Accepting the American culture while continuing to retain their roots. Where the comfort and ease of highly processed food did more damage than good. Occasional trips back to Pakistan with laugh-out-loud moments. And of course, delicious food. The food descriptions are vivid and you are transported to the streets of Lahore or the courtyard of the author’s grandmother’s house.

As I began reading the book, it just reiterated the fact that borders may have separated us but the culture is pretty much the same. I may as well have been reading about an Indian city. That after all, a Punjabi is a Punjabi, irrespective of which side of the border you are. Doodh (milk), dahi (curd), and makkhan (butter) are the go-to for all malaise. The birth of a daughter is rarely a cause for celebration. A mother’s parenting is judged by how marriageable her daughter is. She is always too fat, too thin, too short, too tall, or too dark. And of course, the ever-popular “how would we ever find a groom for you”. Not much has changed from the 80s and the 90s.

“I was supposed to be turning into a woman, not James Earl Jones.”

It is a memoir not just about food but also about fat shaming, body image, and the author’s lifelong struggle with it. A book about family, loving yet oppressive, with their subtle and not-so-subtle jabs about her weight and color. About a woman who married young (an abusive marriage) to prove that overweight girls can be desired. Going under the knife for gastric surgery and tummy tuck. As a public figure who struggled with body image before finally coming to accept her body.

Foodies are in for a treat with the author sharing recipes for some of their favorite dishes towards the end. Dishes that have been mentioned throughout the book. Her ode to Pakistani cuisine.

The memoir shares an inspiring takeaway that it is not achieving the goal weight but the goal to invest in yourself that is the more important. In spite of it being drilled into young girls from early childhood, body weight is not the enemy of dreams, prospects, and happiness. What we often subject our body to “fit in” is not just worth it.

The book is extremely relatable. I enjoyed reading it and would highly recommend it. Particularly to women and young girls who have grappled with body issues and faced fat shaming. 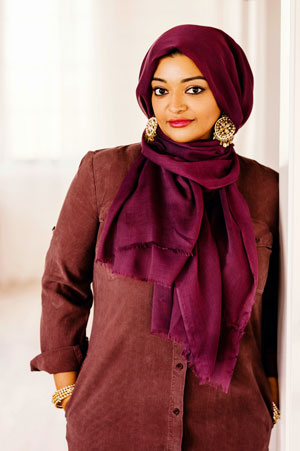 Rabia Chaudry is an attorney, advocate, podcaster, and author of the New York Times bestseller Adnan’s Story and executive producer of a four-part HBO documentary The Case Against Adnan Syed, which was based on her book. Chaudry is also co-producer and co-host of three podcasts, Undisclosed (360 million downloads), The 45th (four million downloads), and the new The Hidden Djinn. A 2021 Aspen Institute/ADL Civil Society Fellow and a 2016 Aspen Ideas Scholar, she serves on the Vanguard Board at the Aspen Institute. She is a Fellow of the Truman National Security Project, a Fellow of the American Muslim Civic Leadership Institute, a Fellow of the Shalom Hartman Institute. Currently, she is a founding board member of the Inter-Jewish Muslim Alliance and the Muslim Jewish Advisory Council, both of which focus on building Muslim-Jewish coalitions around pressing policy issues and educating across communities to break barriers.

This blog post is part of the blog challenge ‘Blogaberry Dazzle’ hosted by Cindy D’Silva and Noor Anand Chawla.