Rekha Rao is a thirty-something Indian American professor of art history. Haunted by the murder of her father and disillusioned by academia, she moves away from her nosy family to Occidental College in Pasadena, California.

When her mentor and father figure is ruthlessly murdered, she is called upon by the police department to shed light on the murder weapon – an idol of the Hindu goddess Durga. Unable to bring justice to her father or to the man wrongly accused of his murder, she sees the case as a redo.

Putting herself in harm’s way, she is insistent on solving the murder. Against Pasadena Police Detective Al Newton’s advice, the amateur sleuth unearths long-hidden secrets, old grudges, and forgotten affairs while unraveling the truth.

Murder mysteries are my guilty pleasure. And more so if the sleuth is a woman. Dharma: A Rekha Rao Mystery by Vee Kumari seemed the perfect fit. Set against the backdrop of archeology and mysticism, it promised an intriguing read.

The writing style is lucid. Narrated in the first person, the author keeps you engrossed with all the twists and turns. Although the premise is a bit far-fetched (an amateur sleuth solving a police case), it is none the less enjoyable to read. The references to TV shows (particularly Criminal Minds) does bring out a chuckle or two.

The characters are fleshed out well. The protagonist, Rekha, is quite likable. The other characters are well layered too. There is also great attention to detail. Whether it is the names of the characters, the historical events, or timelines of archeological finds.

I liked the way the author wove in Indian culture into a murder mystery. The food, the clothes, the poojas, the pushy parents, and the nosy aunties. I also liked the interplay of dharma and karma. That dharma does not exist in a bubble but is a part of everyday life. Most books tend to be in-your-face when it comes to culture. On the contrary, the references here were interknitted into the narration.

The book did become predictable towards the end. By the law of elimination, it was more or less evident who the murderer was. But it was the romance between Rekha and Al that did not really work for me. I felt it wasn’t really necessary and slowed things down. Also, the book could have been shorter. The pages following the climax, attempting to tie up all the loose ends in a neat bow, were more of an overkill. I am a reader that believes in keeping things open to interpretation.

That said, I enjoyed reading the book. If you like murder mysteries with a hint of mysticism, this is the book for you. It is a great attempt by a first-time author. 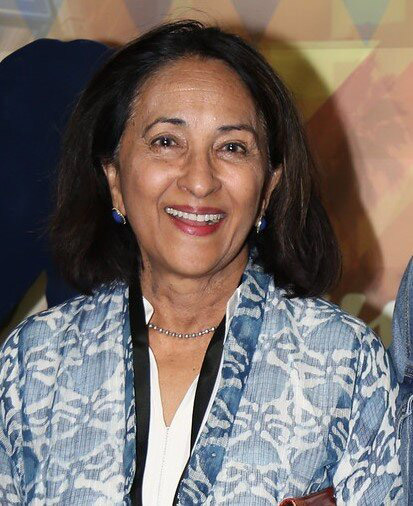 Vee Kumari grew up in India. She loved to read, and often used it to avoid her mother, who might want her to do a chore or two. It was her mother who directed her to use the dictionary to learn the meanings of new words and construct sentences with them. Vee wanted to become an English professor but went to medical school instead.

Upon coming to the US, Vee obtained a doctorate in anatomy. She became a faculty member at the UC Davis Medical Center, where she worked for over 35 years, and later worked for these School of Medicine for five years. Teaching neuroanatomy to medical students became her passion. She published many scientific papers and won several teaching awards.

When she retired in 2012, she took classes from The Gotham Writers’ Workshop and UCLAWriters Program. Dharma, A Rekha Rao Mystery is her debut fiction that incorporates her observations on the lives of Indian immigrants and Indian Americans in the US.

Vee lives in Burbank and is also an actor who has appeared in TV shows, including Criminal Minds and Glow, and produced and was the lead in a short film, Halwa, which garnered the first prize in HBO’s 2019 Asian Pacific American Visionaries (APAV) contest.

I would like to thank PR by the Book for providing a digital copy of the book for the blog tour. All opinions are my own.

Image by monicore from Pixabay